A commission from Nordic Music Days

Performed when: October 10th after dawn.

Distance /Proximity is a conceptual artwork and sonic experiment using  sonic perception to explore the topography of inner-city Stockholm’s most fragmented area Slussen. Where does Slussen begin? Where does it end, and how do these distances sound?

By   using   three hundred wind players  positioned across seven different locations throughout in the vast area of Slussen the work establishes   a circular sonic structure, formed of extended scale patterns, where tones resound from place to place in a somewhat circular motion.

Each orchestra/location constitutes a voice, similar to foghorns signalling; they highlight the interstitial distances and intimacies, and gauge the distances that characterise Slussen. Initially, it is possible to distinguish from where  sounds emanate, but gradually they coalesce to create an increasingly homogenous wash of sound. 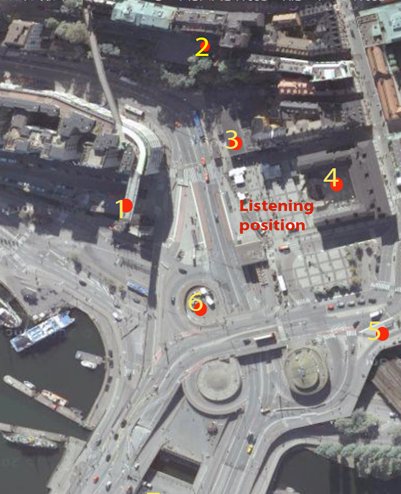 Location of orchestras marked with numbers.