"HOW CAN SOUND,  AS ARTISTIC  MEDIUM, MEDIATE QUESTIONS OF GLOBAL RELEVANCE?"

Commissioned by Ultima - Festival for Contemporary Music, Oslo, Norway. Produced by NOTAM ; Norwegian Centre for Technology in Arts and Music.

Currents is a sonification of the North-Atlantic Currents, made for the new Oslo opera house as part of Ultima festival for contempoary music in 2011. [picture. 1]

The work uses scientific measurement data from the North-Atlantic Currents outside the Faroe Islands. These data are provided by a Swedish research team who has established an automated measurement station continuously forwarding data in real-time to a computer at the department of meteorology, Stockholm University.

The research team is  measuring the changing patterns over time of the flow of the North Atlantic Current which can be directly linked to the melting of ice in the northern hemisphere as a direct effect of the global warming process.[picture 2]

In the work; the data from the research station north of the Faroe Islands  were piped to servers at the Department of Meteorology at The Stockholm University were forwarded onto the installation in the opera where they were continually transformed into a sonic artwork that unfolds in real-time.

From 18 speakers placed along the entire ledge by the huge windows, and from speakers placed on the wooden tier, small drops of sound were projected from all directions. [picture 3]

The installation made use of four data streams. The North Atlantic Current; the semi-diurnal tide; the diurnal tide; and the ionoshere.

The only signal of interest for the research team was the North Atlantic Current. In Currents however, information from the tides and the ionosphere normally filtered out were given a ”second life” as acoustic found objectsin the installation.

The scientific projects main source of data itself, the North Atlantic Current was not used as a sound source. Instead it was used in real-time to control the sound textures and spatial positioning of the sounds from the ionosphere and the tides in the opera foyer. Letting this politically loaded phenomenon control the course of the installation in the opera during the exhibition period.

Thus, the artistic interpretation was directly linked to the global ice melting controversery, and while it was not the purpose of the work to provide answers, it pointed to interconnectivity in these issues, and mediated this through a real-time stream of information that affects us all and transformed this into a spatial auditory experience – underpinned by the location of the Norwegian Opera that borders onto the ocean where the measurementswere taken. 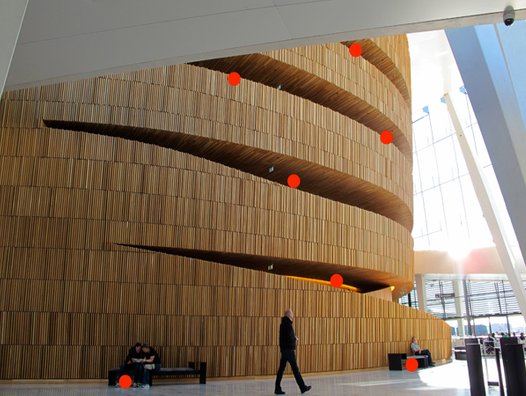